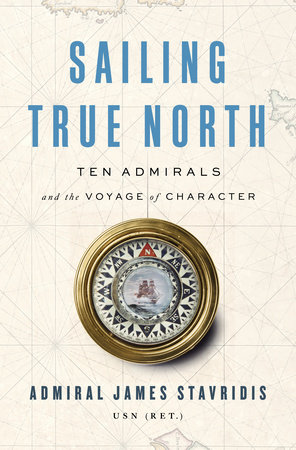 Sea Power has always fascinated me. I will forever cherish the memories of walking in the footsteps of Admiral Chester Nimitz in Pearl Harbor and Admiral Horatio Nelson at Gibraltar. Back in 2011, I spent a night on the Rock and had trouble sleeping. Heat certainly had something to do with it, but I was also pondering how the British legend spent his days here, defending the interests of King and Country at the entrance of the Mediterranean Sea. I like to think that I might have crossed his spirit while walking in the beautiful streets of this British Overseas Territory.

These men and women who ruled the waves were gifted with exceptional and inspirational values. And I’m very grateful to retired Admiral James Stavridis for writing Sailing True North: Ten Admirals and the Voyage of Character, where he details how these larger than life figures not only mastered what are certainly some of the most demanding jobs in the world, but also their character in front of adversity, whether it is the threat of invasion, war, bureaucracy, sexism or racism just to quote these examples. The best lessons are seldom learnt in easy circumstances.

Naturally, I will not talk about each of the fascinating personas that are presented between the covers, but I will write a few words about my Top 3.

The first one was a discovery for me. Zheng He was a 10 years old boy when he stood his ground in front of a conquering Ming General. He was then taken as a prisoner, “castrated and placed into imperial service as a eunuch.” In such circumstances, many people would lose faith in life. The boy nevertheless capitalized on his situation and “gradually became a favorite of the prince” who “[…] charged […] him with one of the most ambitious parts of this plan (rebuilding and modernizing the country): building China’s first deep-ocean fleet and leading it on exploratory voyages beyond the traditional range of Chinese coastal shipping.” Zheng He therefore embarked on a voyage that notably brought him on the South China Sea. This was during the 14th century. Beijing’s claim on that body of water is therefore nothing new.

Zheng He was a wonderful surprise for me in the book and I certainly would welcome a longer chapter or article from Admiral Stavridis about this fascinating figure.

Admiral Nelson is my second selection. A must for me. I already knew that the iconic son of Britannia had lost an arm and an eye during battle. But I was unaware that “[…] he was also afflicted with seasickness and other illnesses on and off throughout his life” and depression. There again, the future victor of Trafalgar turned things to his advantage. Not only did “[…] he painstakingly worked to learn to write left-handed”, he led his sailors to a victory that was “[…] at the top of the list of geopolitical impact within the era.” Said otherwise, Nelson blocked Napoleon’s way.

Third and final, Fleet Admiral Chester Nimitz, the “American Nelson”. The German-American farm boy can also teach us a lot about the voyage of character of our daily lives. For him, “the true acme of character [was] sublimating anger, pettiness, and impulse in favor of a cool, calm temperament.” That was, for the author, “the genius of Nimitz.” In this day and age when we probably live the worst challenges of our epoch, coupled with a toxic political climate inflamed by hatred, intolerance and division, this should be a daily motto in itself. In a social context where nothing is private, his discretion is also a value we should take inspiration from. And, last but not least, I guess I share the positive view Chinese have about the famous sea dog for defeating the Japanese in the Pacific during World War II.

There is one very important quality underlined in Admiral Stavridis book that I’d like to mention before I conclude. On many occasions, he mentions the exceptional character travellers he chose to portray were avid readers, writers and thinkers. Throughout their busy schedule, they took the time to engage in such cerebral activities. In an intellectual environment dominated by social media and intellectual fast food where many people “[…] now balk at reading a single long book”, it is essential to understand that the wisdom and knowledge of humankind is offered through books. The price of being a person of content is spending time between the covers of books. For the author, the books we read are as important as the company we keep in life. Powerful, indeed.

Trust me, you won’t regret picking up Sailing True North, a book which should be required reading for anyone interested in embarking on a journey of character building and making a real difference in the world. We may not be at the helm of an aircraft carrier, but we certainly are at the helm of our lives.

3 thoughts on “Sailing True North: A character-building guide in these troubled times”

This site uses Akismet to reduce spam. Learn how your comment data is processed.